AgLink has now reached 35 years of history since humble beginnings in 1986. In 1986 a small group of leading horticultural rural retailers (EE Muir & Sons, Serve-Ag and IK Caldwell) formed the group that was then known as IHD (Independent Horticultural Distributors).

The group was founded on a set of values that remain to this day. Collaboration, networking and sharing of knowledge – this has been fundamental to the success of the organisation.

The group’s initial activities were to engage collectively with the agricultural chemical suppliers of the day to ensure the “voice of independents was heard”. What followed from this new level of engagement was a focus on harnessing the technical expertise within the group’s members and working with those key R and D suppliers in jointly developing and launching of new molecule technologies. This has remained a key defining part of the groups capability to this day.

From that initial start the group has grown into a truly national group of companies (currently 13) that sell a wide range of input supplies across all categories into the major agricultural industries including horticulture, broadacre cropping, livestock and intensive irrigation industries. This diversity and geographic coverage resulted in a change of name from IHD to AgLink in 2012, AgLink better reflecting the group’s diversity and linkages across many aspects of the industry. In 2017 a refinement of company name saw AgLink Australia formed. This coincided with the formation of AgLink Canada in which AgLink Australia are a shareholder.

The group has now emerged as the major leading independent distribution group across Australia. The group continues to maintain its focus on bring new technology from suppliers to our members farmer customers. 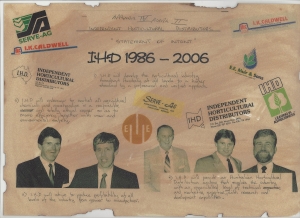 “The philosophy behind why EE Muir and Sons, IK Caldwell and Serve-Ag came together in 1986 remains to this day – like minded independent businesses with a focus on adding value in agriculture.”
Ian Muir – E.E. Muir & Sons